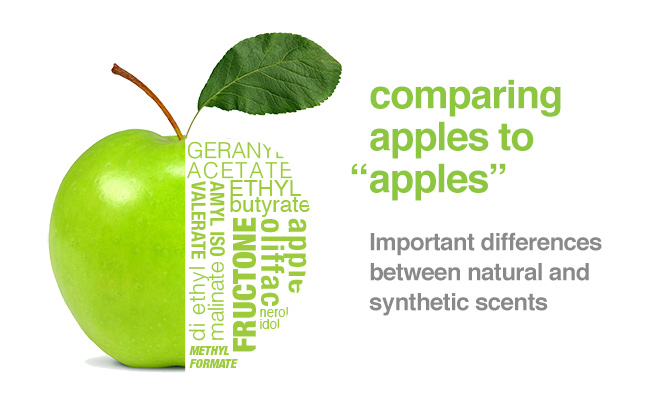 How to educate yourself
The Environmental Working Group (EWG) has demonized synthetic fragrances along with a number of other skin care ingredients for years, claiming dubious sources, hype, assumptions and misinformation. Their findings are not based on science.

When researching ingredients I never use EWG but turn to websites like Personal Care Truth which rely on science based information. Their mission is to educate rather than scare and they don’t generally hold to the credo that natural = good and synthetic = bad, unless scientific findings warrant it.

About allergens and endocrine disruptors in natural and synthetic scents:
Both natural and synthetic scents contain allergens and hormone disruptors but I can’t find any articles from reputable sources (the kind based on science, not hype) that discuss the relative safety of natural vs. synthetic with regard to allergies and endocrine disruptors. The general takeaway form my research is that reactions from synthetic fragrance chemicals seem to be more severe then with natural ingredients but I encourage everyone to do their own research.

So which do you choose?
Birdy Botanicals prefers using natural essential oils because:
– Synthetic fragrance oils are, in general, stronger and longer lasting than their natural essential oil counterparts. I don’t often see this as a good thing.
– Synthetic scents can desensitize our sense of smell so we tend to use more and more until we are overwhelming the people and environments we come in contact with.
– Natural scents neutralize odors rather then mask them. So while they may not stick around long they fix the problem rather then cover it up.
– Natural scents are a more intimate experience for those that are close to us or come in close contact with us. It’s a more sensual, personal experience.
– After using essential oils for years, when I come in contact with synthetic fragrances I feel my throat, nose and head react instantly in a negative way. Not only do I not feel good but the smell I am reacting to can become repulsive.

Sensitive skin is an enormous umbrella under which all reactive skin issues live. There are no black and white rules about what an individual will react to.

There is no such thing as a truly hypo-allergenic ingredient. Someone out there will react to it.

Some of you with sensitive skin may be able to handle some synthetic fragrance and essential oils. It all depends on what specifically you react to.

But, if you do have sensitive skin, the wiser choice is to go with essential oils unless you’ve shown prior issues with them. This may take some trial and error.

Always use a patch test before ever using a new skin care ingredient. If you react cease using immediately.

Birdy luuurves essential oils but understands they too have limitations. Essential oils can be so healing and solve a huge number of skin care issues but we realize they are not for everyone. 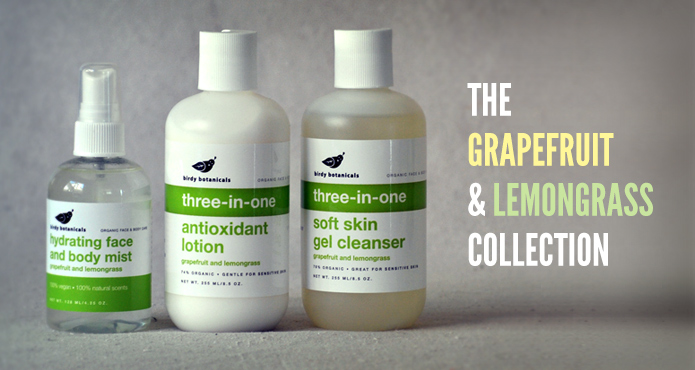 <![CDATA[<a href="http://birdybotanicals.com/blog/wp-content/uploads/2012/10/g-l-benefits-5441.jpg"]]&gt; <strong>Birdy Botanical’s Gift Collections are a great way to introduce simple yet luxurious skin care to the people you love. Giving the gift of great skin with easy to use, organic products is always a go to solution. But first, why pick Birdy Botanicals for the perfect gift? How we set ourselves apart from other skin care lines:

Why pick a Kit?

So, which Kit do you pick? Scent inspired Lavender and White Tea Kit Lavender is a very popular scent that suits men and women. But despite it’s amazing popularity lavender is well known enough that people have formed a definite opinion about it. If you’ve heard them shout to the world “I love lavender” this is a natch! Grapefruit and Lemongrass Kit Grapefruit and lemongrass is a very light citrus scent with a lemongrass undertones. If you are unsure of your person’s scent preference I would recommend this. Created for the variety of our skin’s moisture needs Complete Moisture Kit This Gift Kit was inspired by helping with all moisture needs from head to toe. From light to intense this is a selection to suit any person and everyone on your list. The Essential Moisture Kit This gift kit contains the basics for moisture needs. It’s a great choice for accomplishing one stop shopping for multiple people all for the price of a nice bottle of wine. Something every person can use Room Perfume Kit Made with Essential oils, Birdy Botanicals Room Perfume’s neutralize odors rather then covering them or making them worse like synthetic fragrance oils. There are 3 scents included. It’s a coveted and easy hostess gift and a go-to solution for anyone that if you’re unsure of their skin care preferences. Your giftee can use one in the bathroom, one in the kitchen and one in the room of their choice. Selections to suit a routine or for pampering The Gym Kit Inspired by products that are easily portable and with multiple uses that were handy at the gym. This is a basic but comprehensive kit that has 3 product that would work towards a basic skin care routine. The Day Spa Kit- NEW! Inspired by the day spa experience, this collection enables you or your loved one a day-spa experience over and over all for less then 1 visit to an actual day spa. This kit is not online yet so email me if you’d like to order it. Includes*: – 3-in-1 Gel Cleanser lavender and white tea – Detoxifying Toner – Blue Clay Masque – Anti-aging Face Serum *Customizable but may affect cost $69 ($82 value) ]]> 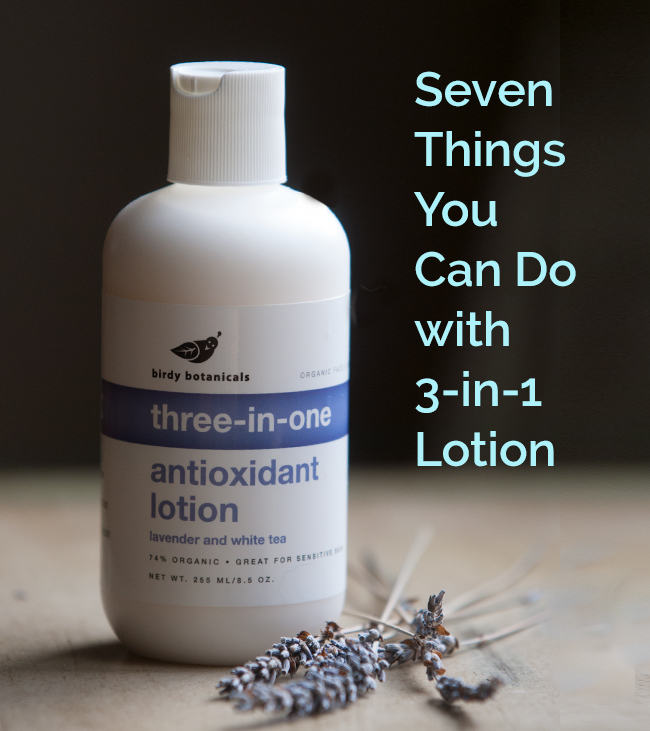 <![CDATA[<a href="http://birdybotanicals.com/blog/wp-content/uploads/2013/10/7-things-lav-lotion.jpg"]]&gt;<strong>My 3-in-1 Antioxidant Lotion was my flagship product for a reason. In skin care, if you can’t make a decent lotion then you should “Get the heck outta Dodge.” Right? The moisturizer I wanted to create:

And I wanted to include a couple serious anti-aging ingredients that your basic lotion doesn’t include. This is where our 3-in-1 Antioxidant Lotion makes the competition pale by comparison. Ingredient highlights:

I soon discovered my moisturizer was as effective with my hands and body as it was with my face. Voila! My 3-in-1 product was born. But why stop at 3 uses? It’s works for face, body and hands so let’s take this puppy for a ride and see what else it can do. It’s a workhorse. 7 things you can do with 3-in-1 lotion:

The current trend in skin care is multi-functional products. Birdy’s been doing this for 6 years now and everyone’s finally catching on. Why buy three (or more) products when you can by one? Let me rephrase that. You don’t want to buy more then 1 product but the skin care companies do. That’s why Birdy’s got your back. And now it’s a nice, soft, well moisturized back. 3-in-1 Antioxidant Lotion comes in 4 scents:

<![CDATA[<strong>Bloglovin is a great site to organize the blogs you like to follow. They alert you with new posts and give you a daily update in 1 email of all your favorites. Check them out and follow Birdy Botanicals to get tips and tricks, DIY beauty, ingredient information etc. We’ve got lots of tricks up our sleeves and we love to share! Follow my blog with Bloglovin Also, if you’d like to sign up for Birdy Botanicals email newsletter for access to blog info, current events and most of all DISCOUNTS! You’ll receive 25% off your first order. Can’t beat dat. See you round the block!]]>

There I was in my kitchen, minding my own business… trying to neutralize the smell of the fish tacos my husband cooked the night before. I grabbed my trusty bottle of Birdy Botanicals Nest Room Perfume with Orange, Clove and Cedar and exactly at that moment heard loud grunting and gnashing of teeth and the arhythmic, thumping cadence of someone (or some thing) climbing my back stairs, all announced by the acrid marriage of rotting meat, mildewed laundry and a hint of spearmint. What can I say—I develop beauty products. Then it appeared. A foul, malignant visage, trembling and screeching, with a face that looked like it had been removed, pulsed a few times in a Cuisinart and re-applied with a spatula. Eeew. And it was at my back door and obviously was not a Jehovah’s Witness… …at least any longer.

The essential oils repelled the rotting corpse, leaving freshness behind

The only weapon I had at my disposal was a Bialetti 2-cup espresso maker at arm’s length on the stove and the Nest Room Perfume spray bottle I still clutched in my right hand. Knowing I still might want a second Americano before beginning my day in earnest, I opted to use the Nest spray. I threw the door open and in one seamless action reflexively spritzed a generous cloud of Nest in what was formerly his face. Fully expecting to be devoured in the next moments, I prepared for my impending doom by closing my eyes and assuming a fetal position on my kitchen floor. The eery silence was accompanied by the lingering aroma of Clove, Orange and Cedar. Reminiscent of a fall morning in Vermont after a gentle rain—with zombies. When I opened my eyes a few seconds later, the unwelcome pestilent visitor had vanished. I peered out the window in time to catch a glimpse of it heading into an alley rubbing it’s one, working eye and screaming like a 3rd grade girl.

That’s when I realized—this product I created to inject a little autumn ambience into the rooms of slightly hip, 20-55 year-old females  in the mid-to-upper demographic, could do double duty as a zombie repellant—and Zom-B-Gone was born.

A Birdy post-apocalyptic original, the spicy aromas of Birdy’s Zom-B-Gone are reminiscent of cool, crisp October mornings before the global plague or your Mom’s kitchen before she became one of the legions of walking dead. Zom-B-Gone will clear the air, might save your ass but will definitely leave you humming a happy tune. Because you’re alive. Now it can be yours for only $12 a bottle. We calculate that one bottle will successfully repel anywhere from 1,500-2,000 walking dead, depending on size, degree of putrification, prevailing winds and aim.

As I was describing to my husband how I thwarted the zombie in my kitchen, I got caught up in the moment and accidentally squirted the poor man in the face with Zom-B-Gone. The good news is now I can say it’s been tested on humans, the bad news is…well just don’t use it on humans. Trust me on this one. The ingredients are all natural but the reaction you get will sound anything but. Also, keep out of reach of children, living or undead.]]>